It is the first step that is troublesome.

It is the first step that is troublesome.

It is the first step that is troublesome. (それは面倒な最初のステップです。 Sore wa mendōna saisho no suteppudesu): is the 42nd chapter of the manga written by Kore Yamazaki.

Chise Hatori finds herself trapped in one Cartaphilus's spells which have her come face to face with her mother and relive parts of her past. It starts off showing the good parts of her childhood alongside her little brother but also the difficulties they were going through because of there being a Sleigh Beggy in the family. A fragment of Cartaphilus appears before Chise and explains that the new curse will both protect and hurt her, it's also the reason she can see the fragment. Chise's father and brother are capable of protecting them but it doesn't last as the father leaves with her brother and never returned.

Left without their protectors, Chise and her mother goes through a difficult time. The mother struggles with work while trying to keep Chise safe from the beings that want to hurt her, ultimately taking a huge toll on the mother. 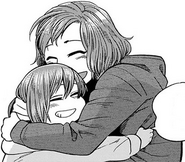 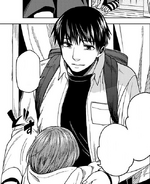 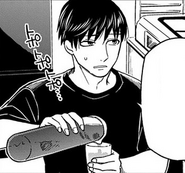 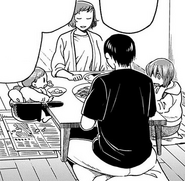 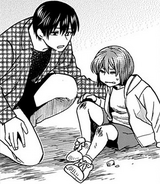 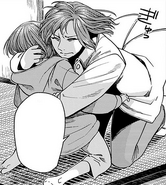 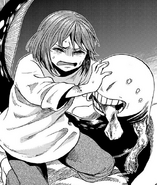 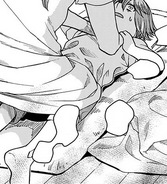 Chise observes herself in the past.

As Chika Hatori returns home, she is greeted by her young daughter. Chika thanks her for watching the house and asks if she was scared. Chise says she wasn't, as her younger brother was there. Chika says that it's good Fumiki looks like his father, because Chise ended up looking like her.

Chise becomes happy, remembering that she changed her brother's diaper. Chika is alarmed and goes to check on him. She is proud of her daughter and praises her while pulling her into a hug.

Later that day, Yuuki returns home and Chise greets him with a hug. He walks into the kitchen where he is greeted by Chika. She notes that he's late coming home. Yuuki pours himself a drink and explains that he was given another shift. He rests on his wife's shoulder while she praises his hard work. An unknown animal can be seen watching from outside.

The family sits down together to eat. He asks if anything has changed. Chika says that, thanks to his and Fumiki's presences, nothing comes in the house. She says that, because of this, she was able to go out shopping for a bit, though she would like to be able to work as well.

Yuuki says that, because Chise is like her, and because she can't go to kindergarten, it would be better if she stay close to her.

Chise realizes that she is seeing her memories. A figure resembling Joseph appears, but she knows that it isn't really him. He explains that he is simply a fragment of what was dismembered. She asks why she is being showed things from so long ago. He says that, because Joseph says that he hates her, he's probably just harassing her. He says that he wants to hurt but protect her. When Chise reaches out to touch him, he warns that she shouldn't until she is fully resolved to.

In the middle of the night, Fumiki begins crying and wakes everyone up. Yuuki says that he can handle it, so the two girls go back to sleep. He brings his son to the kitchen and begins making a bottle. He notices the same creature as before standing at the window and looks back at it, troubled.

When Chise wakes up, she finds her father sitting by the door. He looks worried when he sees her. He considers taking her as well briefly, but says that he will come back for both of them. He pats her on the head and tells her to wait. He leaves with Fumiki in his arms.

Present-day Chise attempts to follow him, but the figure warns that he cannot go past where her memories end.

Chika walks into the room to find only Chise.

Chika is forced to get a job and leave her daughter home alone. While at work, a monster asks if he should help her before quickly flying away. When Chika returns home, she hugs her daughter closely.

She jokes that it's ironic she told her not to be scared. From that point on, Chika pushed herself and always told her daughter she was fine. She had to deal with the stress of multiple jobs, the now threatening monsters, and the safety of her daughter.

One night, Chika is awoken to her daughter's screams. A creature bites her arms. Chika slashes it with a knife and it flees. She holds Chise close as she thinks to herself that she'd be fine if she only had to look after herself.

As Chise and Chika walk together, two creatures comment that the man protecting them must have abandoned them.

At their home, Chika struggles to find work. She hears a voice telling her that, if Chise wasn't there, she would be fine. She is horrified with the thought, but then looks over at her sleeping daughter. She begins to blame Chise for their problems before strangling her. Chise wakes up and asks what she's doing. Chika tells her that she shouldn't have been born.

Chika suddenly realizes what she's doing and is horrified. She apologizes to Chise before throwing herself out the window and falls to her death.

Present-day Chise is horrified to relive her memory but realizes her mother is standing before her.