Elias is Chise's magic teacher. He bought her from an auction, offering his home to her and accepting her as a member of his family. Although, it is revealed that he did buy Chise as an “experiment” to extend her short life, since she’s a Sleigh Beggy. He promises to find a way to extend her life, asking her to withhold from magic as much as possible so she does not weaken her body further. Because he’s the first person to accept her, Chise doesn’t seem to mind being used as means for Elias’s experiment. She is unafraid of him, whether he is in his humanoid form or his true form. Though several opportunities have come to her to leave Elias, she ultimately refuses and says she doesn’t care that he might be using her and enabling her. The mere fact that he was the first to take her in and care for her, unlike her family, is more than enough for her to be content in staying with him. This reveals that she has a strong sense of loyalty to Elias, even after she’s faced with what Renfred tells her about Elias, learns of his past from Lindel, or even seeing his true form. She grows to be attached to Elias, feeling a sense of comfort and security. Early on, Elias mentions that he will make her his wife, the obviously taboo thereof only being made clear to him by others. Despite this, most of the fae believe her to be his wife. Later on in the series, Elias develops romantic feelings for Chise, something that he does not understand due to his lack of understanding of human emotions. Chise also seems to return these romantic feelings, even going out of her way to wear a white dress, a veil, and have rings made for them both.

Lindel makes his first appearance to Chise, riding on a dragon and taking her away from Elias, more as a joke toward Elias and comments that “he hasn’t changed.” Despite his roughness in bringing her to the land of dragons, Lindel treats Chise with kindness and warmly welcomes her to the Dragon Aerie. After hearing that Chise is struggling with her magic, he invites her to return to the aerie, so that she may create her wand. He takes care of Chise during her visit, patting her on the head as a sign of affection, making her meals and praising her work on her staff. While carving said staff, Lindel tells her a bedtime story about the magic, after he learns from Chise that Elias hasn’t educated her too much about it, and Elias' past, something that Elias chose not to speak about. After his story, Chise starts to open up to Lindel, telling him that she is fine with Elias not speaking too much about himself and how she doesn’t feel it’s in her right to press for information. In addition, she voices to Lindel that despite his story, she is not afraid of him and he suggests that she tell Elias that herself. One night, he brings her to a field, where he sings a song in her honor. He even, mentally, has thought that he feels like he is raising Chise, as he is with Elias, although according to his Familiar, Selkie, he considers her like a granddaughter. He is also the one who does the finishing touches on her wand, after she is finished with carving it. When Chise is afflicted with the dragon’s curse, he speaks with Chise, offering his condolences and voicing his concern for her. Although, Chise does not blame Lindel and assures him that her choice had nothing to do with him.

Ruth is Chise's familiar, who considers her a sister. Chise looks like Ruth's old master, Isabelle. They first met, with Ruth, original called Ulysse, coming to Chise’s rescue from a monster, but not without being wounded. As he lies unconscious, Chise remains with Ruth and when he awakens, he is surprised to find her there. When Chise is impaled by Joseph’s Chimera, Ulysse has several flashbacks of Isabelle and how he hoped and wished she would awaken, but she never did. Shedding tears, he begs for Chise to awaken. To his relief she does and she greets him with a soft, but sincere smile. As Joseph makes his appearance, Chise grows angry when he explains that he wants to make Ulysse a Chimera. She begins to tap into her magic, attacking Joseph. Knowing Isabelle is truly gone, Ulysse asks Chise to take him with her and to become her familiar.The two form a magical bond and Chise gives him his new name; Ruth. Now as Chise’s familiar, Ruth finds a newfound strength and is able to destroy the Isabelle-Chimera, after which he bids a solemn farewell to her. As familiar and master, they share the same lifespan. Ruth is able to experience the emotions, thoughts, and memories of Chisé and will often tell others what she is thinking when she refuses to. He is fiercely protective of her and will do anything it takes to defend her and support her.

Chisé shares Nevin's last dream, a final flight before he returns to the earth. As promised, Chisé uses a branch of his tree to form her staff and by doing so, creates a link with him where they can meet between the world of the living and the dead.

After spending a shopping trip with her, the two became friends. They were both taken in as apprentices, and by happenstance, were both asked to bathe the first day they met their teachers. They are both aware of their complicated feelings for their masters.

Chise and Joseph's relationship is strained when they first meet he accidentally stabs her in return getting beaten by Elias. The second time she meets him is in a dream in London he seems to have lost his memory temporarily and calls her miss they sit and talk for a few minutes and then he falls over clutching his left arm apologizing when Chise calls him Cartaphilus he pins her to the ground telling her not to call him the cursed name then asking her how they can be saved and help him. He then takes over Stella Barklem body and tells Chise that he has a way to stop her from dying. When Chise says she'll take her eye out even though she doesn't have a choice he says he hates her. When Chise is talking to the manifestation of the immortality curse he tells her Joseph hates her, however the immortality curse will keep Chise alive as, due to the eye-swap, Chise is now a part of Joseph.

Chise has a good relationship with Stella. When Stella's brother went missing Chise, along with Elias helped look for him. When Stella's birthday came around, Chise invited her. Later on during the party, it was revealed that Chise's birthday was on the same day. And that she is about 6 years older than her. The next year, Stella invites Chise to her birthday party. Only to surprise her by saying that the party was for Chise.

Jade Ariel was one of the three Ariel fairies that came and greeted Chise, when she first arrived at Elias’s house. At first, she had intentions to lure Chise, since she’s a Sleigh Beggy, to the other side; the Land of Fairies. To get what she wanted, she even hypnotizes Chise in hope to easily convince her. She returns to assist Chise in doing a cleansing spell to get rid of the blight that corrupted a human soul. From here on, Jade Ariel and Chise’s relationship improves vastly, often times Jade Ariel kissing Chise on the cheek and offering her assistance. When Chise gets the dragon’s curse, Jade Ariel tells Chise that she never would’ve been cursed if she went to the Land of Fairies, but she doesn’t press the matter too hard. Chise turns to Jade Ariel for help, although Chise believes it’s mostly because she is a Sleigh Beggy, but Jade Ariel reveals that while being a Sleigh Beggy is a nice bonus, she likes Chise as herself, not her power.

Chika is Chise's mother who is in possession of the Sight as Chika was abandoned with Chise by Yuuki Hatori (Chika's husband) when he left with Fumiki Hatori. Due to Chise's vulnerable nature brought on by her status as a Slay Vega, Chika is forced to attempt to balance a working life with protecting her daughter, all whilst mentally deteriorating due to abandonment under such conditions. One day, Chika has a breakdown and attempts to strangle Chise to death, before committing suicide by throwing herself off their balcony. Both of these actions proved to be deeply traumatic for Chise, to the point where she often feels as though she is not supposed to exist or burden others, and to the point where she was unable to even think of Chika as being a proper mother. While Joseph is attempting to remove Chise's arm to attach to himself, Chise is forced to confront her memory of her mother in her dream world, reconciling with the fact that she understands her mother's situation and does not hate her, but Chise can never forgive her.

Yuuki is Chise's father. When Chise was young, her nature as a Slay Vega attracted dangerous creatures to her. Like Chise, Yuuki has the Sight and he was often shown to defend her from and drive away these monsters. At some point when Chise was young, he took Fumiki Hatori (Chise's younger brother) and ran away, but he saw Chise right before leaving and appeared to almost ask if she wanted to come with him, but he decided against it and left. Due to his abandonment, Chise lost the majority of her family and Chika was forced to take on the full weight of caring for Chise while supporting the household. She also retains ongoing anxiety about being abandoned by her loved ones, partially as a result of his actions. Chise's exact feelings towards her father are unknown.

Fumiki is Chise's younger brother. Chise helped care for him as a child, and he seemed to ward monsters away from her with his presence. Yuuki Hatori (Chise and Fumiki's father) ran away when Chise was little as he took Fumiki with him. Chise's exact feelings towards her younger brother are unknown.

Riichi was the owner of the Library in the forest where he allowed Chise to come and read whenever she wanted to. Which grew into a friendship. Possibly because it allowed Chise to get away from her aunt and two cousins. From where she didn't feel like she belonged.

Throughout the series Chise attracts various neighbors to her side which are then seen regularly around her when she is at home. 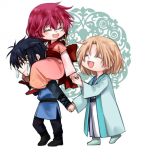